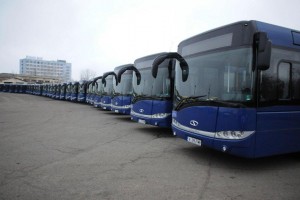 New routes and more courses on several bus lines are launched in connection with the upcoming new school year by the municipal carrier "Burgasbus". The aim is to create convenience for students who use public transport from different parts of the city.

From 08.09.2020 the buses on line № 8 now travel on a new modified route, which covers most of the central part of the city and allows students from "Gorno Ezerovo" to reach most schools easier and faster, without the need for transfer.

After September 15, there will be changes in the schedules of more public transport lines.

In order to facilitate the access of the students from the Professional High School of Computer Programming and Innovation (PHSCPI), in the morning for the period from 07:00 to 08:20 the courses on line № 9 in the direction of "Meden Rudnik" will be performed at intervals of 10 minutes. In 10 minutes the line will move and in the direction of Terminal "Slaveykov" and in the afternoon from 16:10 to 17:10, when classes at the school end.