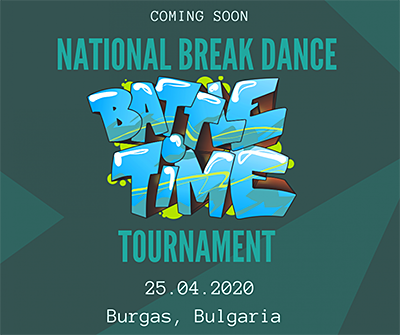 For the third consecutive year the Youth Cultural Center - Burgas and "Black Style Squad" Break Club are organizing a National break dance tournament "Battle time", which will be held on April 25, 2020 in the Military Club Hall.

This year the tournament is organized in two age ranges: groups /teams of children up to 16 years old and individual performers from 16 to 20 years old/. Clubs and dancers from all over the country are invited to participate.

The second stage is the actual dance show and is aimed to the general public. It represents a set of choreographies of all groups and individual performers, and the final fights from the previous stage. This stage will take place in the auditorium of the Military Club.