THE CO-OPERATION OPPORTUNITIES BETWEEN BURGAS AND ALEXANDROUPOLIS WERE DISCUSSED

Home    News    THE CO-OPERATION OPPORTUNITIES BETWEEN BURGAS AND ALEXANDROUPOLIS WERE DISCUSSED
Font: A A A
13 December 2019   Print 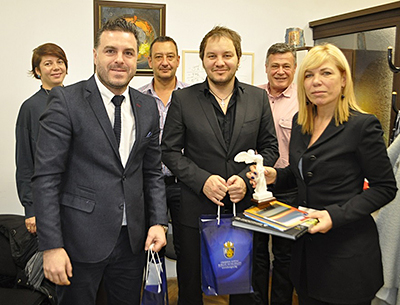 Burgas and Alexandroupolis to intensify their cooperation in the field of tourism, it was revealed at a meeting between representatives of Burgas Municipality and the Greek region of Eastern Macedonia and Thrace.

The two cities have been developing their friendships for years because of their similarity as port centers, natural and cultural heritage. At present, the interest is focused on the development of a common tourist product due to the proximity of the two destinations.

The Deputy Mayor of Burgas Municipality for Culture, Tourism and Sports Diana Savateva emphasized the desire to establish lasting contacts and take real action on both sides in this direction. She suggested that in both cities Burgas and Alexandroupolis Culture Days should be held, as well as organization of general information tours for journalists and tour operators from Bulgaria and Greece. Through them, both destinations will be popularized both locally and internationally. The idea was accepted by the Deputy Regional Governor of the Greek region of Eastern Macedonia and Thrace Athanasios Tsonis, who wished to have a meeting with the tourism industry in Burgas in the beginning of the next year.