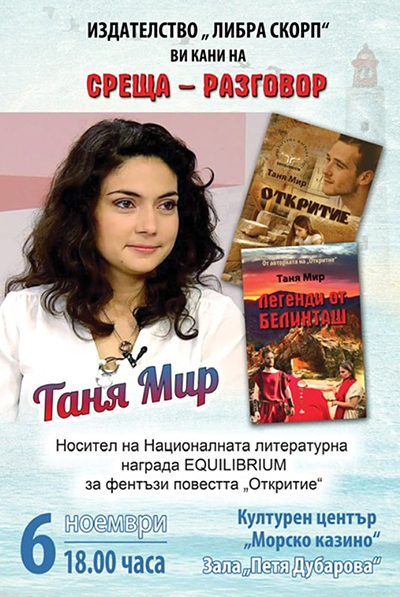 The author of fantasy novels "Discovery" and "Legends of Belintash" Tanya Mir is coming in Burgas on Wednesday. You can meet with the writer at the "Sea Casino" Cultural Center from 6:00 pm on November 6th.

"Discovery" was honored with the national award "Equilibrium 2017" of the Publishing house for debut book. The initiative supports the development of young Bulgarian writers. Last year, a full-length feature film was shot and it goes to theaters in December. Fans of the fantasy genre will also be able to see the trailer.

Tanya Mir's second novel "Belintash Legends" (2019) is inspired by real historical events. In the early part of the 1st century, the Thracians raised the largest uprising against Roman rule, but a major event remained in the shadow of history, says Tanya Mir. Some of the most remarkable personalities of Ancient Thrace come to life. And the second book is about to become a movie.