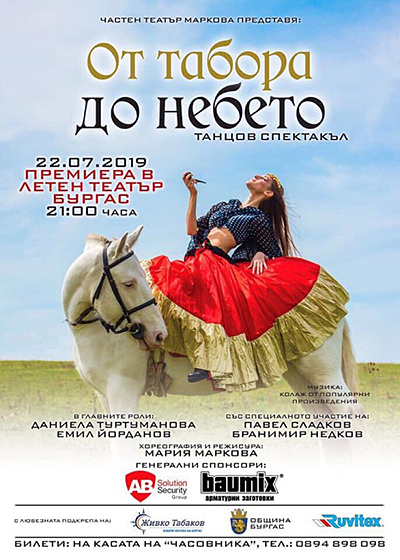 On July 22st the stage of the Summer Theater in Burgas will become an arena of hot passions and burning love. Then will be the premiere of the new dance performance of "Private Theater Markova" - "From the Tabor to the Sky".

The title of the play is sufficiently eloquent. The audience will have the opportunity to enjoy a dramatic story shown in a non-standard way. Classical works are combined with Russian Gypsy romances.

The costumes of the performers are just as colorful as the love between two people. Director and choreographer is Maria Markova, who is known in Burgas with the spectacle "Fairy seasons".

Tickets can be found at the summer ticket office "The Clock". For more information: 0894 898 098-Marusya Ruseva, organizer.