Home    News    Foreigners are Iimpressed of Bike routes and thermal springs in the Burgas region
Font: A A A
23 July 2014   Print 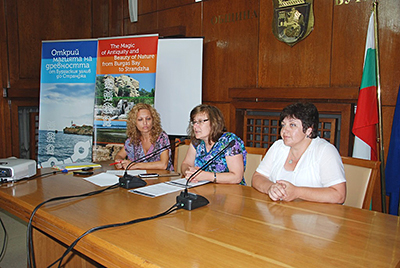 Foreigners are Iimpressed of Bike routes and thermal springs in the Burgas region. This was said today by deputy-mayor Yordanka Ananieva and Krasimir Kostova - director of the History museum in Sredets on the the closing press-conference of the project "The Magic of Antiquity and Beauty of Nature from Burgas Bay to Strandzha Mountain".

The project was implemented in cooperation between the municipalities of Burgas, Primorsko, Malko Tarnovo, Sredets and Kameno for 24 months. Its aims were developing the tourist potential of the region, alternative crafts, increasing the lenght of the tourist season and searching new market segments.

Two new tourist packages and 16 routes were developed in the frame of the project, 10 maps, movie and publications in Bulgarian and foreign tourist editions. 8 workshops and 3 tours for journalists were held in the Burgas region and also the project participated in international tourist exhibitions in the country and in Germany, Italy, Netherlands, Hungary and Romania.