The Musical "Hair" in Burgas on 9 April 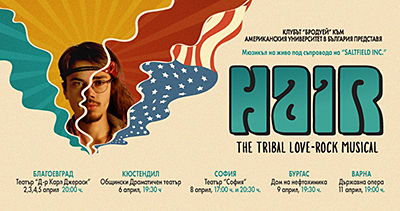 "Hair" is the twelfth musical that "Broadway Performance Club" will present to the Bulgarian audience this spring. Peace, love, freedom, tolerance, happiness - these words describe the spirit of "Hair" - the first rock musical that turns counter-culture into art.

Viewers will be able to trace the story of a "tribe" made up of politically active, long-haired hippies living in New York and fighting the mandatory military service in the Vietnam War. "Hair" has won the world status of not just a musical, but also of a social and cultural phenomenon celebrating life and freedom.

The date of the show is April 9th at the "NHK" Hall and tickets can be found here.