Archaeological structures in Aquae calidae are already accessible to visitors

Home    News    Archaeological structures in Aquae calidae are already accessible to visitors
Font: A A A
16 March 2019   Print

Thanks to a cross-border cooperation program - Interreg - IPA CBC Bulgaria-Turkey, the archaeological structures in the southeastern part of the ancient baths in the late Antiquity and Medieval fortress Aquae Calidae have been restored and preserved. By building safe passageways visitors can now walk through the ruins and see nearby fortification walls, towers, water pipes, etc. In the evening, decorative lighting enhances the experience of ancient antiquities.

The information billboard shows the places where the most significant artifacts were discovered - the golden treasure, the hollow plate with the Three Nymphs, the stone of Nero, the cold Roman basin, the inscription of Guy Pantoulay Gratiac, the samples of the heating system, the Roman waterworks, buildings, etc.

Under the project was organized a scientific conference on Aquae Calidae and the first volume titled "Aquae Calidae - the favorite baths of emperors, kings and sultans" was published.

Finds from Aquae Calidae are digitized and available online. They can be viewed on an electronic device installed in the coffee shop of TC "Aquae calidae".

The project leader is RHM - Burgas, in partnership with the city of Kırklareli, Turkey. 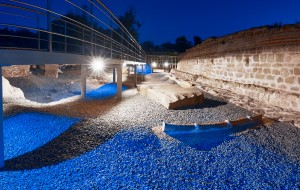 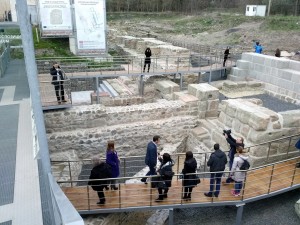 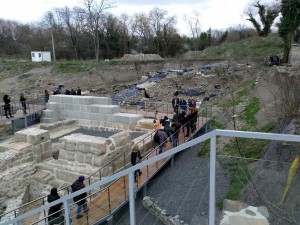