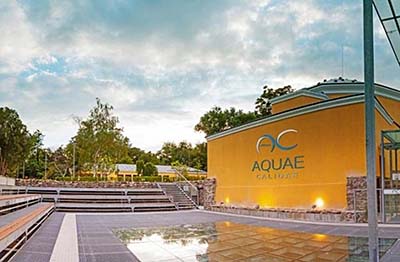 The exhibit can be viewed until the end of the month in the museum in Aquae calidae. The stone can be seen by the end of the month at the Aquae calidae Museum. The exhibit, from the time of Emperor Nero, was found during the archaeological excavations at the tourist complex. Visitors to the museum will be the first who can see it because so far it has not been shown in public. The exposition is realized with the partnership of the Regional Museum of History - Burgas.

The find is a turning point in the current scientific hypothesis of the beginning of the construction of the Roman Baths in Aquae calidae. Until recently, it was supposed that the thermal complex was built by Emperor Trajan in the 2nd century AD, as the other Roman baths in the region were built at that time. After the discovery and reading of the inscription on the stone, the chronological limit of the Roman sites in Akve calide shifted to the beginning of the second half of the 1st century AD as this is illustrated by Nero's inscription for building a bathroom.

The Museum in "Aquae calidae" Tourist complex in the quarter of "Vetren" will be opened every day in November, from 9am to 5 pm. The entrance fee in the museum is 4 BGN for a regular ticket, 2 BGN for students and retirees and includes a projection of a 3D mapping film.