Near Burgas was discovered the oldest known shipwreck in the world

Home    News    Near Burgas was discovered the oldest known shipwreck in the world
Font: A A A
25 October 2018   Print 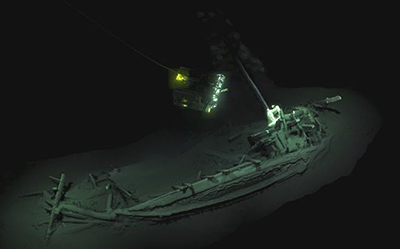 A Greek merchant ship sunk over 2400 years ago was found at the bottom of the Bulgarian Black Sea coast.

The ship is one of the many that crossed the Mediterranean and Greek colonies along the Black Sea coasts. It is located more than 80 km from Bourgas, the BBC reports. / https://www.bbc.com/news/world-europe-45951132/.

The Bulgarian-English team, which explored the remains of the 23-meter craft, announced its findings as the oldest known shipwreck in the world.

Researchers were amazed at the fact that the ship looks the same way as ships painted on some ancient Greek ceramic vessels. It's also unbelievable that the rudders, the rowing booths, and even the contents of the vessels in the ship seem to be preserved intact.
The ship is dated to 400 BC, and the reason why it is preserved so well and for so long is that the water in this area is anoxic, that is, free of oxygen. It lies at a depth of over 2000 meters and is inaccessible even for modern divers.

In a three-year study Bulgarian-English academic expedition have found remnants of 67 shipwrecks.