Home    News    Tonight, Deyan Vatchkov, Kaludi Kaludov and Marian Jovanoski will go on a Burgas stage with the opera "Attila"
Font: A A A
07 August 2018   Print 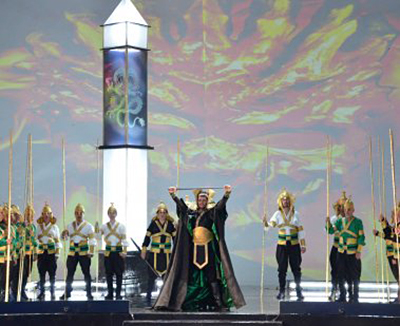 Giuseppe Verdi's work will be presented at 20:30 at the Summer Theater. The performance is part of Burgas Musical Holidays "Emil Tchakarov".

Bass Deyan Vachkov, known as "the new Boris Hristov", is best known for his work in Milan's La Scala. He will play the role of Hunyan chief Attila.

As Foresto audience will see the world-famous tenor Kaludi Kaludov. The audience will enjoy his impressive timbre not for the first time. For the last time, viewers saw him a few months ago in a production of Tosca when he celebrated his birthday and creative anniversary in the seaside town.

Again a star takes on the role of Odabela- this is the vocalist Joanna Zhelezcheva, whose glory already crosses the boundaries of the homeland.

The orchestra of the State Opera - Burgas will join in "Attila" under the baton of maestro Ivaylo Krinchev. Director is Ognyan Draganov and scenography and costumes of famous Romanian designer Catalin Arbore.