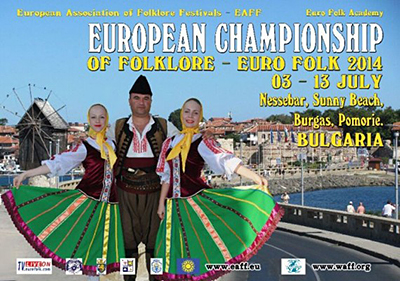 The 6th European Folklore Championship "Euro Folk 2014" will gather more than 70 groups and individuals from dozens European countries. The championship starts on the 3rd of July and will continue to the 13th of July. This year the stages are in Nessebar, Burgas and Saint Vlas.

Traditionally municipalities of Burgas, Nessebar and Pomorie partner to the organizers of European association of folklore festivals and Euro folk academy.

Contest program includes 6 concerts which lasts 4-5 hours and accompaning events such as shows, evening of friendship, workshops and others.