Home    News    An exhibition in the Ethnographic Museum shows with what dresses our grandparents have married
Font: A A A
26 February 2018   Print 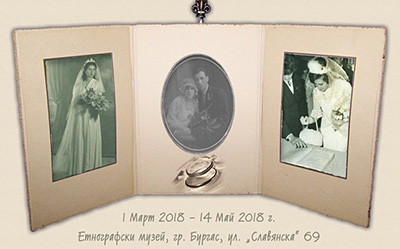 An exhibition in the Ethnographic Museum shows with what dresses our grandparents have married. The exposition follows the tendencies in the development of the bridal fashion in the 20th century, represented by bridal wear, wedding accessories, church plate and pictures collected by citizens of Dimitrovgrad and the municipality.

As in the middle of the last century people from more than 900 settlements of Bulgaria settled in the city, in practice the exhibition presents exhibits from all over the country. The oldest bridal dress is from the beginning of the century - a female wedding wool top dress from 1915, combined with the traditional for the Bulgarian culture red veil and bridal wreat. The newest dress is from 1999.

"What a bride you were, Mum!" will be officially opened on March 7, at 17:00, at the Ethnographic Museum at RHM Burgas, located behind the church "St. St. Cyril and Methodius". The exhibition of the Historical Museum - Dimitrovgrad will remain in Burgas until 14 May 2018.