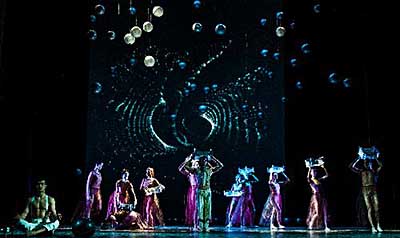 Ballet "Arabesque" starts a national tour in 50 th anniversary season with the show "Siddhartha". The group will tour several Bulgarian cities in February. Their performance in Burgas will be on 7th February on the stage of the Drama Theater "Adriana Budevska".

Today, "Siddhartha" is a dance-theater performance based on the philosophical poem by Hermann Hesse. On the magnificent music of Wagner overtures from "Tristan and Isolde", "Tannhauser" and "Lohengrin", the only ragaby Led Zeppelin and hits from the 30s, choreographer Mila Iskrenova offers a journey to perfection in the poetic novel of Hesse. The sophisticated set and costumes are by Svila Velichkova, the video projects are by Nikola Nalbantov.