Home    News    Ensemble "Bulgare" invites you to a unique trip in the world of Bulgarian folklore
Font: A A A
07 September 2017   Print 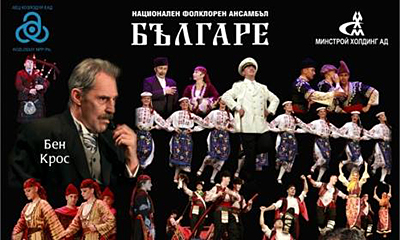 After its triumphant success in various scenes, the spectacle of the National Folklore Ensemble "Bulgare" "The Eighth Miracle" will be played for the second time in Burgas. It will be presented on September 12, 2017, Tuesday, at 20.30 on the stage of the Summer Theater.

The performance is a superb lesson in history, music, patriotism and dance. Prof. Milcho Vasilev, Petko Krastev, Gencho Genchev, Dancho Radulov and Ivan Kirishev have been composing the music for more than a year, in which the characteristic rhythms of the six main folk Bulgarian regions sound. The two hours in the magic of the fascinating Bulgarian rhythms, performed by the "Bulgare" ensemble, are enough for the audience to once again feel proud of our unique folklore heritage.

Tickets at the cash desk "Clock" in the garden next to Hotel "Bulgaria".