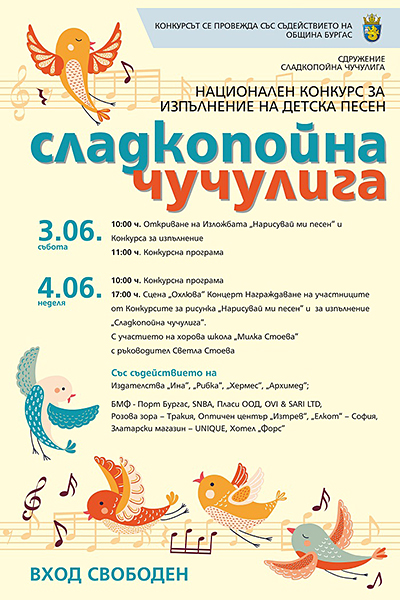 This year, the National contest for children's song "Sweetheart lark" will be held on June 3 and 4, in the Youth Cultural Center (YCC) Hall.

In the past 2016. the Association "Sweetheart lark", the Ministry of Culture and the Municipality of Burgas produced nine new children's songs. Instrumentals, lyrics and original recordings can be downloaded for free from the competition website  http://www.sladkopoinachuchuliga.com/ .By regulation, in the first round, the small singers participate with a song from the "Sweetheart lark" fund.

Parallel to the children's song contest will be held the "Draw a song" competition. In it the participants draw their works again on songs from the "Sweetheart lark" fund. The exhibition with the awarded works will be exhibited during the music competition in the halls of YCC-Burgas.

The final concert with the winning participants will take place on June 4, at 5 pm, on the open stage "The Snail".