Home    News    AN ADVERTISING POSTER FROM AN EXHIBITION IN THE BURGAS MUSEUM TURNED INTO A POSTER OF BULGARIAN LIBRARY lN LYON
Font: A A A
08 May 2017   Print 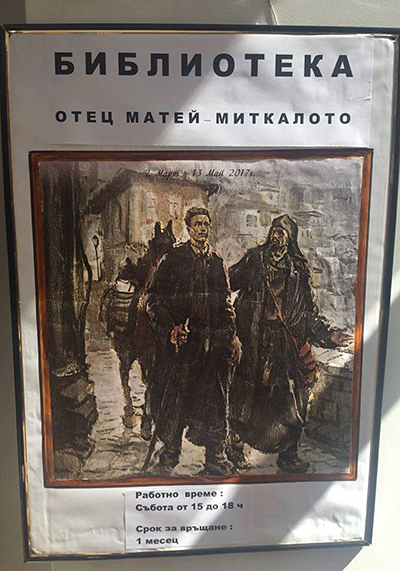 A poster from an exhibition for Father Matey at the Historical Museum traveled the distance from Burgas to Lyon to inspire our compatriots in the French city where more than 5000 Bulgarians live. In one of the Bulgarian shops there is a small library of books in the native language that can be occupied. The first edition of interesting publications for the library is a donation from the "Desant" newspaper, which reaches from the Black Sea coast to the Rhone coast from hand to hand through eight people.

Following the increase in the book fund, her librarian and long-time journalist, Jean Solomon, decided to place a post for the library's working hours.Some time ago, he red in the "Desant" newspaper information about the exhibition at the Burgas Historical Museum titled "In the footsteps of Father Matey and his companions". Since the library in Lyon is named after the tireless Revival person  Matey Preobrazhenski, Jean wishes to receive the poster exhibition, which will be posted on the entrance to the corners with Bulgarian books in the small shop in Lyon.

The Burgas Regional Museum of History immediately responds to his request and soon the poster reaches him.

The plaque includes an image of the painting "Levski and Father Matey Preobrazhenski in Veliko Tarnovo''' with author prof. Ivan Petrov, 1958