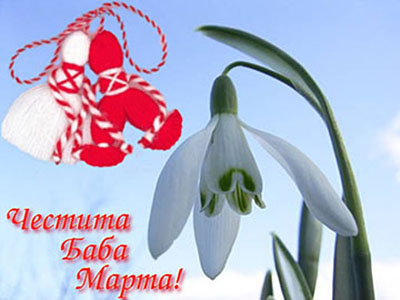 On the first of March Bulgarians traditionally are tying up martenitsi. Baba Marta is a mythical character in the Bulgarian folklore. In folk beliefs represented in sayings and tales, its name is associated with the name of the month "March".With Baba Marta and March are connected many customs and festivals dedicated to the coming spring.

The most famous custom associated with Baba Marta is putting the martenitsi (twisted white and red thread) on persons and young animals on 1 March - the day of the arrival of Baba Marta. Throughout the month there are a lot of ceremonies to banish snakes and lizards, and divination associated with some migratory birds.