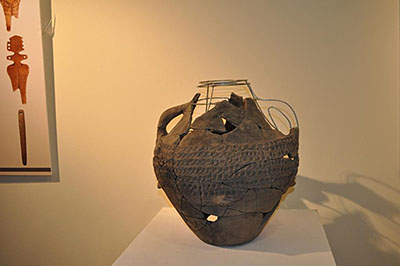 The unique discoveries of Kozareva mound can be seen of all the citizens of Burgas. The impressive exhibition was officially opened two days ago and will be in the seaside city until the 24th of April. Spectacular artifacts are exhibited in "Alexander Georgiev - Kodzhakafaliyata" hall of Cultural Center "Sea Casino".

Amulets and jewelry from skull bones, stone script, one of the largest known plates - symbol of prestige are part of the exhibition.

The exposure is valuable because the discoveries in Kozareva mound illustrate how different domestic industries have become crafts - special production for exchange, which is the earliest form of trade.

The exhibition is organized by Burgas Municipality and Sofia University "St. Kliment Ohridski" in collaboration with museum "Ancient Nessebar" - Kableshkovo and the museum in Pomorie. It is part of the project of Burgas Municipality for development crafts INNOCRAFTS, financed by the European Fund for Regional Union.