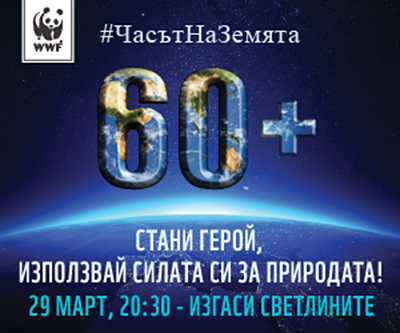 *The event will be filmed and the video will be displayed on "Alexandrovska" Str.

Burgas will mark this year's world initiative of the International environmental protection organization WWF - "The Hour of Earth" with unusual and attractive event.

Volunteers of the youth organization of the Red Cross will recreate a clock with candles in their hands on the 29th of March /Saturday/ on "Atanas Sirekov" square. The clock will count the time 20.30-21.30 in which millions of people around the world will turn off the lights in their homes to contribute for overcoming climate changes. All attendees of the square will also be attracted to the eco initiative as displaying the outer circle on the dial of symbolic clock.

The whole will be filmed and the move will depict the minutes in which the main public buildings in the city will remain without light. Once the movie is ready it will be displayed on the electronic boards on "Alexandrovska" street.

The organizers urge all citizens of Burgas to support the world initiative "The Hour of Earth" with taking part in the event on the square which starts at 20.00 o'clock or with turning off the lights in their homes and light candle at 20.30. The aim is to show that each of us is able to change the world we live in.

"The Hour of Earth" was marked for the first time in 2007 in Sidney, Australia and then became tradition and takes place every last Saturday of March. Then 2.2 million people were part of the first world Earth hour by turning off the lights for one hour. Only one year later 50 million people from 370 cities from 35 countries around the world are joining the initiative.