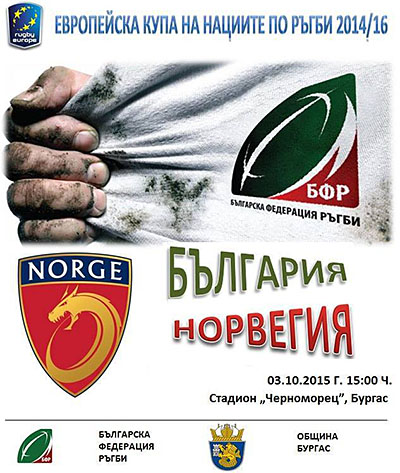 Burgas will host the match of the European rugby 15 cup for men between the teams of Bulgaria and Norway. The attractive clash is on October 3rd /Saturday/ from 15:00 hours on the training field of stadium "Chernomorets" in district "Akatsiite".

The meeting, which without a doubt will bring many positive emotions to players and public, is part of the events marking "Burgas - European city of sports 2015". It was arranged in London by the presidents of the two federations Atanas Zafirov and Per Torkildsen.

"During this month England is host to the World rugby cup. The tournament is the third most watched sports event, after the Olympic Games and the World football championship. It is viewed in 270 countries, among which is Bulgaria, which is now a part of the big rugby family.

We appeal to the residents and guests of Burgas to support on Saturday the national team", said the president of the Bulgarian rugby federation Atanas Zafirov.

After the successful hosting of the state rugby 7 championship in June and the positive reactions, Burgas is among the main contenders to welcome the European championship in 2016.

The options are for Burgas to host the rugby 7 championship for men and women, or rugby 15 for youths. The final choice will be made in December in Paris.