Home    News    Kalinka Zgurova celebrates 55 years creative work jubilee with a concert on the eve of the Unification
Font: A A A
28 August 2015   Print 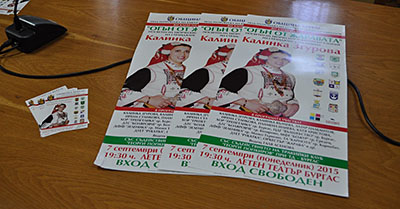 The only folk singer, which has won the music award "Grammy" - Kalinka Zgurova, will present a concert devoted to the unification of Bulgaria to the Burgas public.

With a grandiose show on the stage of Summer theater from 19.30 on September 7, the Voice of Strandja, as she is known, will mark 55 years of creative work. The concert is with free entry and is a gift to all residents and guests of the city on occasion the National holiday.

Kalinka Zgurova will perform the most lively and favorite songs from the Bulgarian folklore. This became known today at a press conference in City Hall, in which took part the organizers Irina Slavcheva and Georgi Nikolov, Kalinka Zgurova and the composers prof. Dr. Stefan Chapkanov and prof. Petar Lyontev.

The idea of the organizers is to create an unforgettable atmosphere and the authentic Bulgarian feel, and what better way to do this than use folk songs.