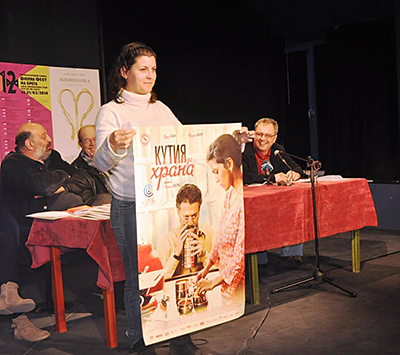 *The newest project by provocative Lars von Trier will be shown

"Sofia Film Fest by the Sea - 2014" is cultural event which is rare because it brings taste", said prof. George Dulgerov at the press conference for presentation of this year's festival.

The poster of the film fest includes movies from Poland, Russia, India, USA, Hungary and Bulgaria. Some of the titles, that the Burgas audience will be able to see in "Adriana Budevska" theater, have already won prestigious awards like "Emmy", "Crystal Globe" and "Silver Bear".

The festive program will last from the 13th to 21st of March and the tickets will be priced from 6 to 8 lev. They will be on sale next week.

Serbian director Goran Markovitch will arrive in Burgas for the opening of "Sofia Film Fest by the Sea".  The start of the film marathon will be given with his movie "The Counterfeiter".

The newest movie by provocative Lars von Trier is in the selection for this year's edition of the festival. The main role in "Nympho" is entrusted to Charlotte Gensbourg, who is daughter of legendary musician Serge Gensbourg. Her partners are a whole galaxy of Hollywood and European cinema - Stellan Skarsgard, Shia Lebof, Jamie Bell, Connie Nielsen, Uma Thurman, Christian Slater, William Defoe and others.

Pictures of one of the most influential artists in the recent history Edward Hooper come alive in the move, directed by Gustav Deutsch - "Shirley: Perceptions of Reality".

Hooper not only inspires the Austrian director Gustav Deutsch, but is becoming a primary presence in the move. The synthesis of the pictures, the camera and the woman, who tells the story, achieve visual and dramatic impressions with earthshaking magnitude. "Shirley: Perceptions of Reality" is a movie which reminds of itself by its real language.

The latest work of the Italian movie master Paolo Sorrentino - "Great Beauty" will be presented during the "Sofia Film Fest by the Sea".

The special selection of the fest includes also the movies "Snack Box" by Ritesh Batra, "Ida" by Pavel Pavlikovski, "The End of the Vicious Circle" by Felix van Hruningen, "Bad Haircut" by Mariana Rondon, "Grand Hotel Budapest" by Wes Anderson, "Vaptsarov - 5 stories for 1 shot" by Kostadin Bonev and screenwriter Ivayla Alexandrova, "The Thief of Books" by Brian Percival, "Child Position" by Kalin Peter Netser, "Stalingrad" by Fyodor Bondarchuk, "In Bloom" by Nana Ekvitimishvili and Simo Gross, "Traffic Police" by Vojtek Smazhovski, "The Big Notebook" by Janos Sas, "Mice Poison" by Konstantin Burov, "The Woman from the Lighthouse" by Anna Kitanova, "Three Days in Saraevo" by Nikolay Todorov and "The Geographer Drank the Globe" by Alexander Veledinski.