Dancing, art, music and much more today at Atanasovsko lake 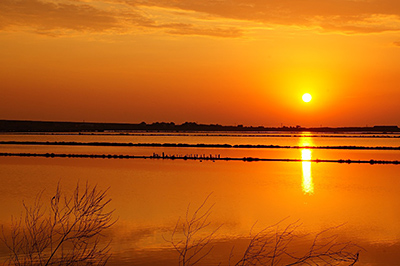 The festival of the salt begins in several hours and will gather on the shore of Atanasovsko lake people from whole Bulgaria, who came specifically for this unique “salty” holiday. For a third consecutive year various activities for children, art events and challenges for the body and soul will attract in the last Friday afternoon of August diverse public near the lagoon.

The topic this is “Symbiosis” – a natural phenomenon, in which two or more organisms draw mutual benefit by their co-existence. This is Atanasovsko lake – an invisible network of complex relations, one puzzling organism, which lives, breathes and pulses near the heart of Burgas.

The events, included in the program of the Festival of the salt are all subordinated to the relations – the dance improvisation of Ana Salazar in the mud of the lake “Rhythm and salt for the soul” – the musical round, in which the public will take part and feel the rhythm as movement, Air yoga in the hall, “Animalia” – one exhibition-symbiosis between illustration and sculpture, the atelier “Paint me…your connection with the lake” are only a part of the events this year.

The music will be different and we hope connecting – one young singer from Burgas Lidia Stamatova will perform lyrical songs on the background of the sun setting over the lake, and after that the experiment performers from Ultra Fuels and the avant-garde D-r Laing from Plovdiv will play music for the visitors of the festival.

“This year I come to Burgas especially for the Festival. I like it… it is small, but big enough, considering its location – Atanasovsko lake. Exceptionally romantic atmosphere, interesting people and entertaining events between the sea and the lake. I love the specific smell of the lake, the salty taste on my skin and the birds around me” – share the young Yana Gocheva from Sofia.

The festival of the salt will be held on 28 August 2015 from 16.00 to 22.00 hours. The access to the festival is free, and you can reach it from the end of the Sea garden (the parking by the restaurants) in direction the salt works or from the other side – the road to Sarafovo. The vehicles remain behind the barriers. In order to avoid traffic the easiest way is to come by foot or with a bike.

Organized by Bulgarian foundation Biodiversity in the framework of the project “Salt of live”, financed by Program LIFE+ of EU and realized in partnership with BSPB and “Chernomorski solnitsi” AD. Realized with the cooperation of dozens of volunteers from Burgas and environmentalist brigade “Atanasovsko ezero 2015”.