Music, sports and lots of emotions in Burgas on August 30 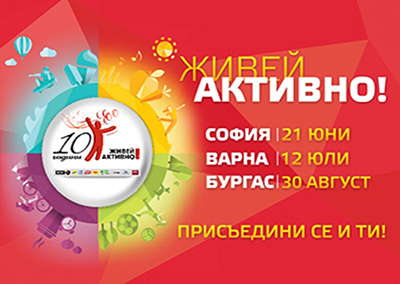 On 30 August with a grand concert in Burgas will be closed the third edition of LIVE ACTIVELY! for 2015. The event is organized with the help of Municipality Burgas and is part of the marking of the 10 year anniversary of the initiative of Nestle Bulgaria for balanced eating and active way of life.

From 18:30 hours on the stage in front of Pantheon monument will be some of the biggest names in music in Bulgaria. Lora Karadjova, Rafi, Leo, Igrata, Skiller, Santra, Kristina Doncheva, Angel Kovachev, Pavel and Ventsi Vents will entertain the public with an exciting show, and they will perform their biggest hits. Lots of emotions, smiles and unforgettable moments await all, who join in the sports activities of LIVE ACTIVELY! in Burgas.

The world beat-box champion Skiller, will give lessons to all who want to learn the "craft". Even newcomers in this musical style will have the chance to make first steps in the world of beat-box, thanks to Skiller, who promises to show to all the fans how he became a champion.

The start of the initiative will be given at 10:00 hours. Towards the Pantheon monument in the Sea garden will depart three parallel marches - with a bicycle from the Pier in the Sea garden, with roller-skates and skateboard from Graphic base Burgas and pedestrian march from Cultural center "Sea casino". The three marches will gather in front of Pantheon monument, where together with some of the most loved Bulgarian athletes and popular personas will do things in the Sea garden and the city beach.

During the whole day by the sea will be organized dozens of family games, volleyball, football, water polo, Heal Fit Gymnastics, Beat-Box, Zumba, cooking, Kangoo Jumps and fun for family pets. A number of famous athletes will be a part of LIVE ACTIVELY! in Burgas, to demonstrate how important and healthy is the balanced and active way of life.

Movement, sport, competitions, game for balanced eating, cooking, dancing, music and family relay-races are only a part of the ideas, which volunteers from the whole country can join on the sitewww.jiveiaktivno.bg and be a part of the jubilee program of the events in the campaign. All, who want to receive more information about LIVE ACTIVELY!, can do so in Facebookhttps://www.facebook.com/Live.Actively or at the site of the initiative www.jiveiaktivno.bg

The initiative LIVE ACTIVELY! Is held yearly for 10 years now and is port of the overall program for popularizing the balanced way of eating and active way of life by Nestle Bulgaria - the biggest food company in the country. Each year LIVE ACTIVELY! Is growing and more people take part in the campaign, attracted by the idea of playing sports, moving and being active in the name of healthy lifestyle and balance eating.