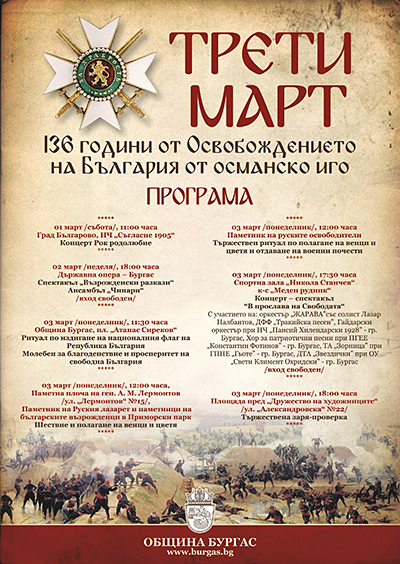 Solemn fireworks will be held again for the National Day of the Republic of Bulgaria – the 3rd of March after two-year break in Burgas. This time all parts of Burgas Military Garrison will be on the square in front of “Artists Association” on 22 “Alexandrovska” str.

For this purpose, the square will be decorated with altars that symbolize the eternal fire. The names of those who died for the freedom of Bulgaria will be honored before the solemn start. The beginning of the ritual is at 18.00 o’clock.

The celebration of the National Day in Burgas will start on the 2nd of March at 18.00 o’clock in State Opera House – Burgas, when “Chinari” ensemble will recreate the spirit of struggling for the independence of all Bulgarians in their spectacular performances on poems by Hristo Botev – “Renaissance Stories”.

The celebrations will continue on the 3rd of March at 11.30 with service for the welfare of free Bulgaria and ceremonial raising of the national flag on the square in front of City Hall.

Rituals of laying wreaths and flowers at the memorial stone of the Liberator of Burgas – gen. Lermontov will start at 12.00 o’clock.

“In Celebration of Freedom” is the name of the second concert-performance. It will be held on the eve of the 3rd of March in “Meden Rudnik” quarter at 17.30 in “Nikola Stanchev” sports hall.

The spectacles are special gift for all citizens of Burgas by the Municipality in occasion of the 136th anniversary of the Liberation of the Republic of Bulgaria.

Ritual of rising the national flag of the Republic of Bulgaria

Prayer for the welfare and prosperity of free Bulgaria

Parade and laying of wreaths

Monument of the Russian Liberators

Concert “In Celebration of Freedom”

The square in front of “Artists Association”, 22 “Alexandrovska” Str.