Home    News    After a four year break a literature workshop restarts activity in house-museum of Petya Dubarova
Font: A A A
19 August 2015   Print 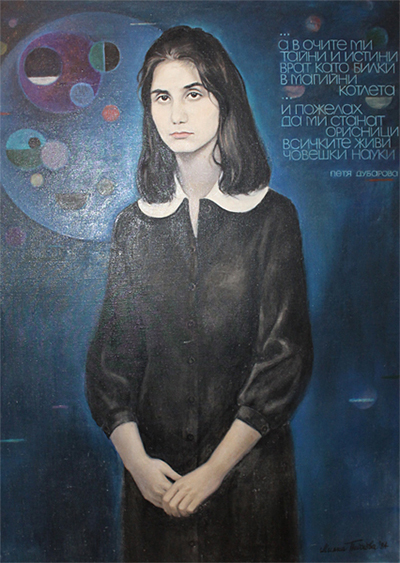 After a four year break in the house-museum of the Burgas poetess Petya Dubarova there will be meeting again of novice authors and proven people in literature. The new edition of the writter's meetings will be realized with a dynamic form. Every day, for a week the young talents will discuss their interests with a different tutor. In the role of lecturers will be the poets/writers - Alek Popov, Vlado Trendafilov, Kristin Dimitrova, Elka Stoyanova, Dancho Eftimov and Ivan Suhinarov. This became known at an open meeting in the house-museum.

From today till the end of the year in house-museum Petya Dubarova /str. "Gladstone" 68/ can be seen the portrait of Petya, made by the famous painter Milka Peykova in 1984. The picture, with size 120x160 was given to Regional library "Peyo Yavorov" three years later. According to words from the mother of the poetess the look in Petya's eys has been captured with incredible precision.

"It was important for us to gather writers, who are emotionally connected to house-museum Petya Dubarova. I thank all the people, who promote our activity, throughout the years. I believe in the talent of the young authors. They already proved what they ca do and will continue to do it in the future" - this said Elitsa Dubarova, sister of the poetess and manager of the house-museum.

In the house-museum was Todor Ivanov. He lives in village Cherno more and is one of the biggest admirers of the works of the poetess. He had arrived there together with his family and right after they had examined the museum they wrote their message in the book for visitors.