Home    News    The best in the swimming marathon - Ventsislav Aidarski and the Bulgarian Olympic hope Nina Rangelova
Font: A A A
17 August 2015   Print 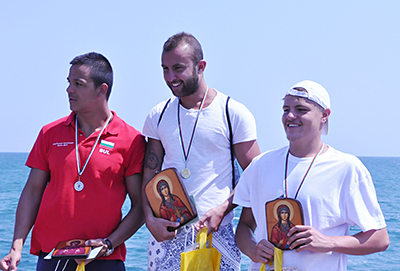 63 brave swimmers dived in the waters of the Black sea, to swim from island Saint Anastasia to the Pier. All finished successfully and in perfect mood. The first to finish the 6400 meter course was Ventsislav Aidarski from Sandanski. His time was 1 hour, 17 minutes and 24 seconds. Second and third in the men category were Tsanko Tsankov from Burgas and Arseniy Beketov.

First in the women category was the best Bulgarian swimmer Nina Rangelova, which is preparing for the Olympics in Rio next year. Her time was close to that of the men - 1 hour, 23 minutes and 52 seconds. Second and third were Nikol Koshedjiyska and the Anna Dolganina from the Burgas club "Briz".

The only unexpected challenge was the jellyfishes, which were present along the course. This year were mobilized 20 vessels for guiding and watching over the competitors, among which was a ship from the Navy base near Burgas. The prize fund was also substantial - the winners in both categories received 1000 leva, second place - 600 leva, third - 400, fourth - 300, fifth - 250, sixth - 200, seventh - 150 and eighth - 100.