Hundreds watched the show of the strong men at square "Troykata" 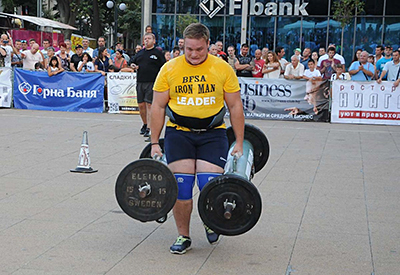 Hundreds of residents and guests of the city watched the 4-hour show of the strong men, participants in the fifth round of the state strong men championship. The attractive competition, which is part of the events marking "Burgas - European city of sports 2015", was held on square "Troykata".

The winner of the "Iron man challenge" became Petyo Hristov, who had 36 points in the final standings and kept his position as a leader in the rankings after the five rounds of the state championship. Second came out the 18-year old Ivan Mryankov with 30 points, and third Yavor Blagoev with 24 points.

The cups and awards were given to the winners be representatives of Municipality Burgas. There was an amateur tournament, in which participated 14 residents and guests of the city. The winner in it was the giant from the Czech Republic - Irji Marjka. He received a 3-month fitness subscription card for one of the leading fitness chains in Burgas and Bulgaria.