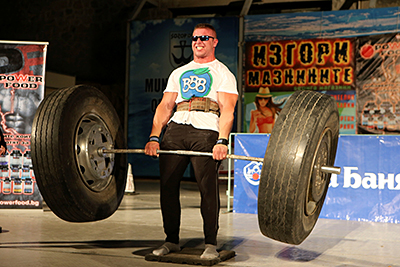 Iron men will compete in Burgas on 15 August /Saturday/. At square "Troykata" will be held the State strong man championship "Iron man". The fifth round of the prestigious tournament is under the patronage of the mayor Dimitar Nikolov and is part of the campaign "The strong against drugs", as well as part of the events marking "Burgas - European city of sports 2015". The start will be given at 18:30 hours on Saturday.

Ten of the strongest men in Bulgaria will arrive in the city, to compete for the first places in the State championship. Among them are Petyo Hristov - leader in the rankings, his main rivals Ivan Mryankov, Velizar Mitov, Yavor Blagoev, Kristiyan Zlatkov. An injury in the last round has ruled out Daniel Kostov from the competition. Konstantin Ilin will also miss this round, because he is representing Bulgaria at the international tournament "The strongest Slav" in Slovakia.

The prizes for the tournament are provided by Athletic Fitness and include a 3-month, 1-month and 2-week card for visiting the fitness centers from the chain on the territory of Bulgaria.

Much adrenalin, strong men, beautiful women, free beer - all of this and more surprises await those, who chose to be a part of the show "Iron man" in Burgas.