Robbie Williams is in Burgas! 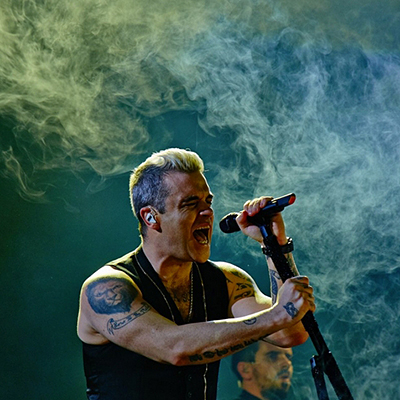 After a long wait Robbie Williams landed in Burgas, the star arrived in Burgas with his private jet yesterday night at 21:10 hours along with 40 people, among which personal security, persona cook, masseur and driver. Robbie and his team were picked up from the runway under heavy security measures and headed directly to the hotel, in which they spend their first night in Bulgaria.

Today, August 7, in the day of the long awaited show, Robbie and his father Pete Conway will arrive in the festival zone at 17:00 hours. From two days the dressing-rooms have been ready; everything is decorated in the colors mocha and purple. In Robbie’s room there is a treadmill, 40 inch TV and X-box 360 console, on which Robbie plays before every show. The backstage zone will be separated under heavy security measures.

The menu of Robbie is exceptionally healthy. White fish, salmon, brown rice, green vegetables are part of the things, which his personal cook will expect if they are up to the standard. Bulgarian tomatoes and cucumbers have been specially picked for the catering on place, and the bar contains mostly aloe vera and naturally aerated water.

In front of the festival zone, even before sunrise at 04:00 in the morning, impatient fans started gathering. They will wait all day at the entrance of SPIRIT of Burgas, in order to get the best places for Robbie’s show. The police advises all visitors, who have yet to set off for Burgas, to depart soon, to avoid the traffic jams. The festival doors open at 16:30 hours.

The organizers remind, that anyone with ticket STANDING FRONT can pay extra for access to GOLDEN CIRCLE zone at the festival’s ticket-desks, as well as in the network of Eventim in the whole country – OMV, EasyPay, Piccadilly, Technomarket, Technopolis, NA TAMNO, ticket center NDK. The VIP tickets with seats are almost depleted.