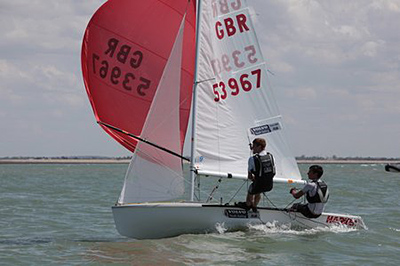 A record number of boats - 220, will participate in the European sailing championship for class 420 and class 470 in Burgas. This was announced today at a press conference by the president of the Bulgarian sailing federation Evgeniy Mavrodiev. On the press conference were present the deputy mayor Krasimir Stoychev, the director of Port Burgas Diyan Dimov, head referee of the regatta and chairman of the international Olympic class 470 - Stanislav Kasarov, as well as the chairman of the international class 420 Katrine Dots.

In the Olympic class 470 are 2 Bulgarian crews with one of them being from Burgas, and in class 420 - 5 Bulgarian boats, with 2 crews from Burgas.

"This is an exceptionally prestigious event, because the competitors will be the best at European level, as well as some of the leading nations in sailing", said Diyan Dimov.

In the regatta will compete representatives of almost every European country and besides them there will crews from Canada, USA, Argentina, Hong Kong and Australia.

The sports event will be held from August 7 to 15. The organizers are Yacht club "Port Burgas" and Port Burgas, in partnership with the Bulgarian sailing federation and Municipality Burgas.