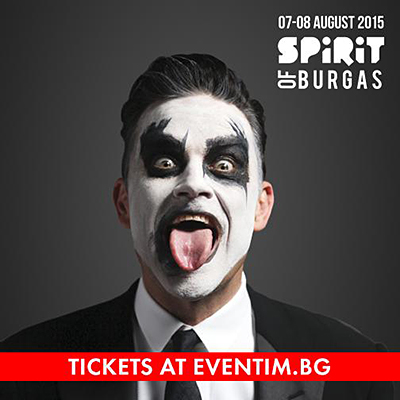 Impressive festivals, big musical events, exciting adventures and intriguing city attractions transform Burgas in the most interesting place by the sea in August. During the last summer month the city undoubtedly is a top festival destination.

Among the most attractive places, which can be visited and are exceptionally suited for the “addicts” of tagging and selfies, is the epic show on the beach – the 7th edition of SPIRIT of Burgas, with the participation of the pop idol Robbie Williams. Besides Robbie, KWABS and Stereo MCs with their special DJ set b2b with Terranova will perform on the stage in the first festival night. Before them we will see the Belgian star MILOW. With evert pass day the interest for the second festival night grows, when headliner will be the British band Kasabian, dubbed as the best concert band.

The festival program of Burgas in August starts on the 1st, when the National song competition “Burgas and the sea” will be held. New and already popular performers will compete in the 33rd edition of the popular musical festival. On the stage will go out Kalin Velyov, Ivaylo Kolev, Aleksandar Baychev, Ivan and Alfredo Torres, Vasil Petrov, Neli Andreeva, Kremena Dimitrova, Vasil Chergov, Elena Kokorska, Fandango and Silvia Milenoff, Kristina Dimitrova and Sabatin Gogov, Nedelyana Hristova.

This year “Burgas and the sea” will have an emotional continuation. On August 2 the famous Bulgarian composer maestro Stefan Diomov will celebrate his 70 year jubilee on the stage of the Summer theater. Lots of famous pop performers will be present at the event.

Until August 2 Burgas is host of the festival of the wine. The place is expo center “Flora” in the Sea garden.

On August 4 is the climax of this year’s edition of “Jazz in Burgas”. On the stage in expo center “Flora” will come out jazzmen from Bulgaria, Germany and the USA. The Bulgarian stars of the program are Stoyan Yankulov and the singer Vesela Boneva.

The 8th edition of Burgas musical holidays “Emil Chakarov” was started in the middle of July, buy the program during August is exceptionally attractive.

On August 4 will be the stage premiere of the fiery work of Carl Orff “Carmina Burana”. It will be presented along with “Bolero” of Maurice Ravel, in which takes part the ballet of State opera – Burgas.

Two more premieres will witness the public of the musical holidays – “La Traviata” and the musical “Charlie’s aunt”, with the actor Mariyan Bachev. In the program of the big musical event are included more ballet shows “Cinderella”, “Scheherazade”, “Romantic” and the operas “Carmen”, “Don Carlos”, “Aida” and “Nabucco”.

Special attention deserves “Ah, this…Musical” with Orlin Goranov, Orlin Pavlov and Edelina Kaneva. It will be presented on 24 August from 21.00 hours.

On 6 August the fans of metal music will have the chance to see the new edition of Sea of Black Festival.

The place is Summer theater. The start of the metal fest will be given at 16:00 hours. Taking part in the event will be: Thrown To The Sun (TUR), The Hourglass (ROM), Dimholt, As Orchids Wither, The Outer Limits, Occultum, Concrete, Piranha. The event is realized with the help of Municipality Burgas. Free entry!

On 8 and 9 August will be held the third edition of Tattoo Convention Burgas. The event conceptually coincides with the edition of the musical festival SPIRIT of Burgas /7 and 8 August/ and this year will await it public in the new Sports complex of GRE “Rakovski”. For a consecutive year the fans of tattoos have their two days, in which they can get to know the art of tattooists from Bulgaria and Europe and to immerse themselves in the unique atmosphere of the tattoo culture. In the two day program of the fest, except demonstrations of tattoo mastery of the participants, are included many entertaining events: competitions for the best tattoo in several categories; Review (Bulgarian Strength and Beauty); DJ and many prizes and unforgettable emotions.

From 9 to 16 August the city will host the second edition of the international puppet theater festival “Days of puppets”.

From 17 to 21 August will be held the International folklore festival. In this year’s 43rd edition will participate groups from Georgia, Italy, China, Slovakia, Serbia, Turkey, Ukraine, Hungary, Estonia and Nepal.

The prima of the Bulgarian music Lili Ivanova, the favorite of the ladies Veselin Marinov, Yaldiz Ibrahimova, Mustafa Chaushev, Tonika Domini and the pop idol Miro will present their concerts on the stage of the Summer Theater in August.

Among the interesting places, which the guests of the city cannot only visit, but also to “immortalize” themselves with a selfie, is island St. Anastasia, the Festival of sand sculptures, “the living” exposition of tropical butterflies in the Natural science museum and the photo hit – “the refreshing fog” at square “Troykata”.