Robbie Williams' father will join the concert of his son 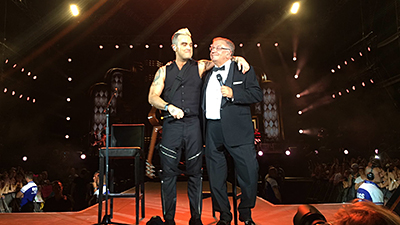 Robbie Williams comes for SPIRIT of Burgas with his father Pete Conway, who is also a singer. It is expected the two to perform at least one song together on the stage on the beach; for Pete has been prepared a separate dress room in the backstage of the festival. Father and son come out on stage together only in few chosen concerts of the tour LET ME ENTERTAIN YOU, and today it became clear, that the Bulgarian public will see them together on August 7 on the beach stage.

Today started the building of the main stage of SPIRIT of Burgas. "This is one of the biggest stages in Europe. From yesterday the trucks are unloading the elements and this morning starts the building", said Dimitar Madjarov, director of Municipal Enterprise "Summer theater, festivals and concerts" in Burgas. The huge stage, on which on August 7 will perform Robbie Williams, and a day later the British group Kasabian, is built according to the standards of the tour of England's bad boy; the stage looks the same in all 25 stops in Europe. The show of Robbie in Burgas is the first beach concert in the career of the Brit, who has over 800 live performances behind his back.

The tickets for both festival days of SPIRIT of Burgas with headliners Robbie Williams (August 7) and Kasabian (August 8) are at a price of 180 leva. Limited numbers of tickets for GOLDEN CIRCLE for August 7 are in sale in the network of Eventim in the whole country. The VIP tickets offering seats at special stands facing the beach stage are almost depleted.

Tickets can be bought from the network of Eventim.bg in the whole country - OMV, EasyPay, Piccadilly, Technomarket, Technopolis, NA TAMNO, ticket center NDK. In sale are also tickets for Golden Circle (Only for August 7) and VIP stands with seats.