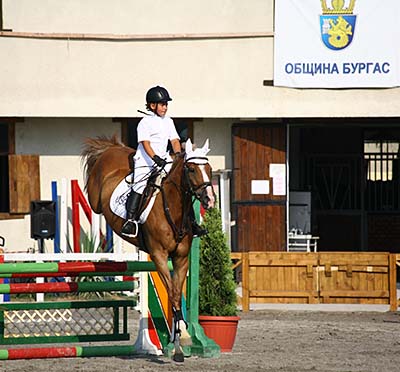 120 horses from 30 clubs from the whole country will take part in the qualifying rounds of the fifth national equestrian tournament "Cup Burgas".

The attractive competition in the discipline jumping obstacles is on Saturday and Sunday. The main open tournament, which will present the best is on 7 and 8 August /Friday and Saturday/ is part of the events marking "Burgas - European city of sports 2015". The events are at the Municipal equestrian base.

Organizer of the event is the local equestrian club "Han Krum", with the help of Municipality Burgas and the Bulgarian equestrian federation.

The qualifying rounds begin on Saturday. The start is at 16:30 hours. On Sunday they continue from 9:30 hours.

Among the participating will be also the former president of the Turkish equestrian federation Arman Yozgyurken.

The hosts of club "Han Krum" will rely on the two big hopes of Burgas and Bulgaria's equestrian sports Siyana Bazoteva and Jeni Mihova.

These competitions bring enjoyment and lots of emotions to competitors and spectators. Without a doubt in the same manner will pass this weekend during the qualifying rounds and especially on the fifth open tournament "Cup Burgas" on 7 and 8 August.

On 5 August /Wednesday/ the organizers have prepared a training parkour under artificial lighting, which will be an undeniable attraction. The parkour will be with 10 obstacles with triple and double combination and will have precursory fixated heights of 100/110/120/130 centimeters.