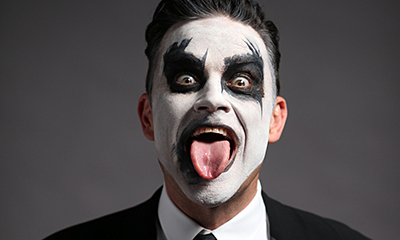 SPIRIT of Burgas approaches and the organizers began to unveil more details from the dress room of the stars. The bad boy of England, Robbie Williams, has decided to make one lucky Bulgarian girl’s dream come true and to lay down with her on the stage on the beach. The pop star will choose a girl from Golden circle zone and will take her on stage, where they will lay together in a specially prepared for the occasion bed. Robbie will sing to her one of his latest hits, in front of the tens of thousands of spectators on the beach in Burgas.

These news reached a part of the fan club of Robbie Williams in Bulgaria: “In principle this happens on most of his concerts around the world, but here it will be special, because we will be on the beach, under the stars, and if it is too hot, we keep our fingers crossed that Robbie will take all his clothes off”, said members of the club.

With the approaching of the festival the interest towards the festival increases, as the organizers and Municipality Burgas are already preparing to welcome lots more people than it was expected at first. On Monday, at a special press conference in Burgas, will be announced the additional measures, which will be taken, to avoid big traffic jams. In the plans of the mayor Dimitar Nikolov and Municipality Burgas is closing of man streets and boulevards around the festival zone, which will be transformed in free parking zones with around 1200 places.

We remind you, that Bulgarian National Railways released special trains Sofia- Burgas- Sofia, which will additionally help all who have decided to come to Burgas on 7 August.

Tickets can be bought in the network of Eventim.bg in the whole country – OMV, EasyPay, Piccadilly, Technomarket, Technopolis, NA TAMNO, ticket center NDK. In sale are tickets for Golden Circle (only for 7 August) and VIP stands with seats.