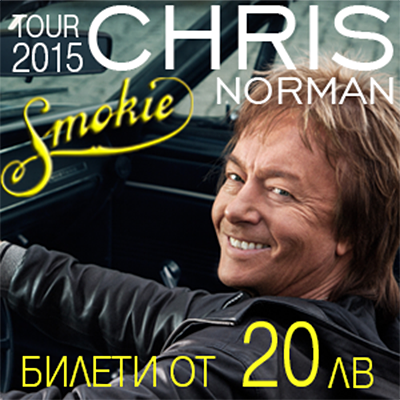 The front man and founder of the band "Smokie", Chris Norman announced Burgas, as part of his tour in Bulgaria this autumn.

The night of 21 October 2015 the Burgas audience will see and hear live, the unique voice of the rock legend. Evergreen songs like "Midnight Lady", "Living next door to Alice", "Oh Carol", "Darlin'", "Ordinary Heart", "Be my babe", I'll meet you at midnight", "Mexican Girl" and many more classics, as well as new hits, will be a part of the show by Chris Norman.

The concert is realized with the help of Municipality Burgas.

The place is State Opera house Burgas, and the starting hour is 19:00.

Tickets are at prices from 30-60 leva, and are already in sale. Look for them at the ticket-boots of the Opera, Office 1 Superstore, gestations OMV, stores Piccadilly and in the network of www.eventim.bg

The organizers have released also promotional tickets for the biggest fans - the first 300, are 10 leva cheaper.