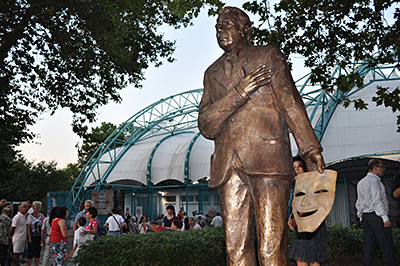 The titan of Bulgarian satire Georgi Kaloyanchev is already welcoming people at the entrance of Summer theater in Burgas. The life-sized sculpture is work of Georgi Chapkanov. The monument was unveiled with a special ceremony, on which were present the wife of the Bulgarian actor Valya Kaloyancheva, his son Ivaylo Kaloyanchev, Nikola Anastasov, Slavchoo Peev, friends and fans of Kalata.

"I admired Kaloyanchev, he was truly great. I have the luck to make his sculpture. I thank all residents of Burgas, who gave what they can, for the statue to become fact. I have done my job, I am happy, you should by happy too", said during the ceremony the sculptor Georgi Chapkanov.

The creation of the monument of Georgi Kaloyanchev was realized after a Public contributor's fund and Municipality Burgas started a campaign for raising funds under the motto "I give for Kalata". Many cultural institutions, organizations and citizens took part in it.

After the unveiling of the monument, in the Summer theater was presented the play "Mr. Ganyo Balkanski", the favorite of Kaloyanchev. This time the protagonist was played by his son Ivaylo.