Burgas WIll Be a Host of Handball Derby 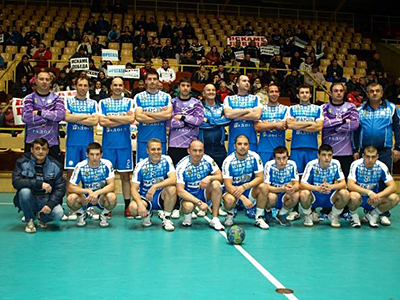 Handball club "Fregata" has a real chance to occupy first place in "A" National handball group after defeating the handball champion of Bulgaria "Dobrudzha" - Dobrich and rehearsal in a match of the second round of Cup of Bulgaria over the last weekend.

On the 23rd of February, at 18.00 o'clock, in "Mladost" sports hall, Burgas will be a host of the first match of the second half of the championship of Bulgaria in handball for men. The leader in the classification "Fregata" - Burgas will compete with "Lokomotiv" of Varna, which has allowed loss only from citizens of Burgas.

"Fregata" will meet "Lokomotiv" - Varna in quarterfinal clash for the Cup of Bulgaria on the 1st of March 2014.

The manager of "Fregata" - Nikola Dobrev calls the citizens of Burgas and all who love handball or are related in some way to go to the handball games and support the team players in the important match.