Home    News    The stage premiere of "Carmina Burana" will delight the public at Burgas musical holidays "Emil Chakarov"
Font: A A A
13 July 2015   Print 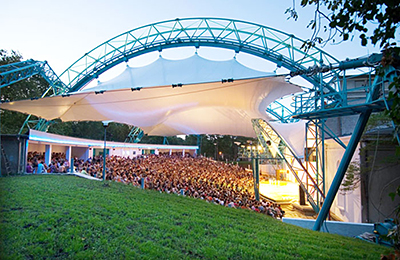 The stage premiere of the fiery work of Carl Orff "Carmina Burana" is one of the accents of this year's edition of Burgas musical holidays "Emil Chakarov" 2015.

"Carmina Burana" will be presented on 4 August, along with "Bolero" by Maurice Ravel, in which participates the ballet of State opera Burgas.

"Two more premieres will delight the public in the musical holidays - "Traviata" and the musical "Charley's aunt", with the actor Mariyan Bachev" said the director of the Opera house Aleksandar Tekeliev. He explained that the lighting for the effective mirror interior of "Traviata", which multiplies the images on the stage, is prepared for 12 hours.

The 8th edition of Burgas musical holidays "Emil Chakarov" will be opened on 17 July /Friday/ at 21.00 hours by Ruth Koleva and the orchestra of Burgas opera with conductor Vladimir Djambazov.

In the program of the big musical event are also included the ballet spectacles "Cinderella", "Scheherazade", "Romantic" and the operas "Carmen", "Don Carlos", "Aida" and "Nabucco".

Special attention deserves "Ah, this...Musical" with Orlin Goranov, Orlin Pavlov and Edelina Kaneva. It will be presented on 24 August from 21.00 hours.

"We expect big interest towards this year's edition of Burgas musical holidays "Emil Chakarov". Traditionally the shows in the Summer theater are watched by lots of foreign guests of the city and this year it will be the same", said Dimitar Madjarov, director of "Summer theater, festivals and concerts" Municipal Enterprise. The specified, that the tickets are already being sold.