Home    News    An excellent performance by Shore Invaders in the competition at the Shiloto area
Font: A A A
13 July 2015   Print 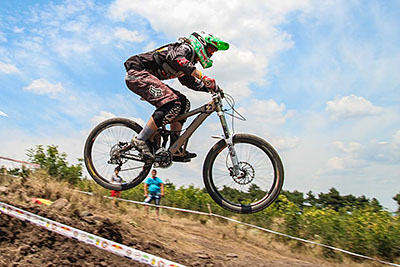 The Burgas club Shore Invaders performed excellently at the domestic competition in mountain bike riding DH- BURGAS 2015, which was held yesterday at the area Shiloto near “Meden rudnik”. The bike riders from Burgas won a total of four medals in the different categories – in the women’s category the gold was won by Victoria Genova, in the 9 year old’s category – Rosen Rankov, followed by Anton Dachev and Ivaylo Petkov – the three are from Shore invaders.

Official guests of the finals were deputy mayor Loris Manuelyan, director of Center for Administrative Services “Vazrajdane” Magdalena Manolova and the general secretary of the Bulgarian Cycling Union Martin Grashev.

The winners got 2 medals – from the club organizer Shore Invaders and from the federation BCU. Exactly the competition DH-Burgas is the start of the good cooperation between the clubs and the federation.

“With Martin Grashev we have a common goal – to unite and iron out all the differences between the mountain biking and cycling and to unite ourselves under one management”, said the organizer of the event Nikolay Jelev.

The bike riders, who are the most real criterion of the quality of the bike track and the organization of the whole event, did not hide their delight and were fascinated by their stay in Burgas. In relation it is possible Burgas to host also the biggest mountain bike tournament in Bulgaria – the national championship.