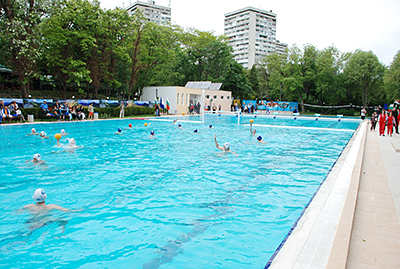 Burgas will again host the final of the State water polo championship. A second consecutive weekend the open-air swimming pool "Flora" will welcome the best water polo players in Bulgaria, now for junior aged youths. The championship is from 10 to 12 July /Friday, Saturday and Sunday/ and is part of the events marking "Burgas - European city of sports 2015".

A week ago the boy's team of club "Chernomorets" won the bronze medals. In the three competition days spectators at pool "Flora" will be able to watch the battle for the tittle and prizes. Except the hosts from club "Chernomorets", among the best 6 teams in Bulgaria are the capital's "Lokomotiv-N.N." and "Slavia", "Komodor" and "Aqua sport" Varna and "Botev" Vratsa.

After the first final tournament in group "A" the young hopes of "Chernomorets" are one second place, which is an excellent position to attack the champion's title. The boys of trainer Petar Yonov have 4 wins and 1 loss. The water polo players from Burgas lost only against "Lokomotiv-N.N.". The team from the capital is leader in the temporary standings of the state championship.

The final matches at the open-air swimming pool "Flora" will begin on 10 July /Friday/ from 17:00 hours. One against another will stand the teams of "Chernomorets" and "Slavia". The award ceremony will be on Sunday, right after the derby between "Chernomorets" and "Lokomotiv-N.N.", with which the championship will end.