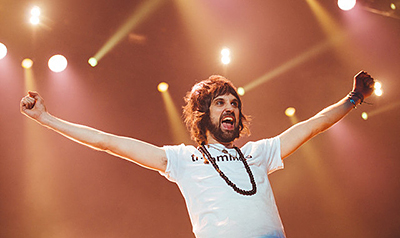 The Brits surprised Disclosure during a festival in Poland

A real show put Kasabian during the festival Open'er, which was held several days ago in Poland.

The British band was a headliner in the last festival day and for a consecutive time showed why they are called the best concert band in the world. They performed the hits from their last album 48:13, with which they arrive in Bulgaria on August 8 for SPIRIT of Burgas. The show began with the Bumblebee, and during the whole time the vocal Tom Meighan talked with the spectators, he even opened a football topic, when he saw the flag of a football club. "It is good to see Leicester City here. We will survive, do not worry", he said and continued with covers of Fatboy Slim - Praise you, and the legendary The Doors - People are strange.

With this, the show, which Kasabian prepared for the fans, did not end. The festival was closed with a set of the British electronic duo Disclosure, including the hits from their debut album Settle. During their performance, Tom Meighan and his colleagues showed up, jumping on the stage, enjoying the music, which made the fans ecstatic. No wonder the Brits may have prepared something similar for Burgas, because right after their gig on stage come out the British DJs of The World of Drum and Bass - Calyx & TeeBee, Danny Byrd, The Prototypes, MAZTEK and DJ SS, who is also from Leicester and is a friend of Tom Meighan and company.

SPIRIT of Burgas 2015 will be held on 7 and 8 August on the Central beach in Burgas. Tickets for the festival and passes for the camping site can be bought from the network of Eventim.bg in the whole country - OMV, EasyPay, Piccadilly, Technomarket, Technopolis, NA TAMNO, ticket center NDK. Sold are also tickets for Golden Circle (only for 7 August) and VIP stands with seats.