The last Thracian kings emerged from the past of Burgas 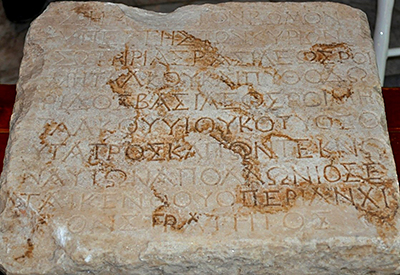 On June 9 this year during archeological digs at the site Aquae Calidae in Burgas was found an exceptionally valuable inscription in Greek on a marble slab. In it are mentioned the names of three of the last Thracian kings and the dynastic connection between them. In this inscription for the first time are mentioned the children of Remetalk II and Pitodorida II, and the genealogy of the Thracian queen has been learned - she is the daughter of Kotis III, who is the son of Remetalk I. The slab is dated from 26-37 year A.D. - a time, when Jesus was already grown up and wins over more followers in Judea, and the mentioned Remetalk II leads a rebellion against the roman emperor Tiberius Julius Cesar August. Ten years after this period Rome finally dethrones the Sapey dynasty and puts to an end to the Thracian kingdom as an independent state. Thrace becomes one of the many Roman provinces.

In the unique inscription is mentioned a sanctuary, built by Apoloniy Eptaykent /strategist under the Thracian king Remetalk II of Anhialo and the region around Anhialo/. It was devoted to the goddess Demeter and the marble slab probably was a part of the complex. The archeologists are sure, that the probability of the sanctuary to be located in Aquae Calidae near Burgas is big.

"This find immerged, while we were building the new sewer system of the districts Vetren and Banevo. It is not golden, but its value is bigger than that of the precious metal. The inscription fills in the blank spaces in the history of the last Thracian kings. Keep in mind, that we have only uncovered 10% of the territory of Aquae Calidae. After this find we will increase the funding for the digs and speed up the work on the site, because we expect to find not only the sanctuary of Demeter, but also a big Christian church, because among the things founds is a part of a reliquary", said the mayor Dimitar Nikolov today during a press conference for presenting the latest finds from Aquae Calidae. Expert information about the finds was given by the archeologists associate professor Dimcho Momchilov and Miroslav Klasnakov, who are working on the site, as wells as the director of Regional History Museum Burgas Milen Nikolov. At the press conference were present also the deputy mayor Yordanka Ananieva and the living history of Burgas - prof. Ivan Karayotov.

The archeologists thanked Municipality Burgas for the constant financing of the digs, which is provided in the last 6 years. According to them the valuable inscription is proof of the ally relations between the last Thracian and Pontian kingdoms along the northern shores of the Black sea. A proof is the name Pitodorida, which is typical of Pont.

The archeologists announced another valuable inscription, on which can be seen a part of the name Pantuley Graptiak - roman governor of the province Thrace during the reign of emperor Marcus Aurelius around 172 A.D. /famous from the movie "Gladiator" by Ridley Scott/.

During the last two years at the Aquae Calidae site were found lots of items from daily life - fragments of bronze clubs; fibulas (broches), which are used to fixate the toga; key ring; belt pieces and appliques. Also found were lots of Byzantine lead seals, which from an archeological view point are extremely valuable, because they show reliable information about different private and state people from the past. Among them is an imperial seal of Theodora - representative of the Byzantine Macedon dynasty from 11 century. It has an image of Hail Mary and until now a similar one has not been found. Other valuable items, found in Aquae Calidae, are lots of wooden combs from XI-XIII century, which for our geographical location are very rare finds. A bone comb was also found, dating from VI-VII century, typical of the material culture of the Germanic tribes.

According to the mayor Dimitar Nikolov the new findings prove once more, that Burgas is not a 200 year old fishermen settlement, but an important from a geopolitical view point base for lots of people and civilizations during the last 2000 and even more years. It can be said that Aquae Calidae is like a cake with different layers, where artefacts are found from different periods of time - Greek, Thracian - Roman - Byzantine - Bulgarian - Ottoman.

During this and next year Municipality Burgas will work harder for the development of the region around the ancient bath houses, for a proper display of the finds, and for the localization of the most likely situated around here sanctuary of Demeter.