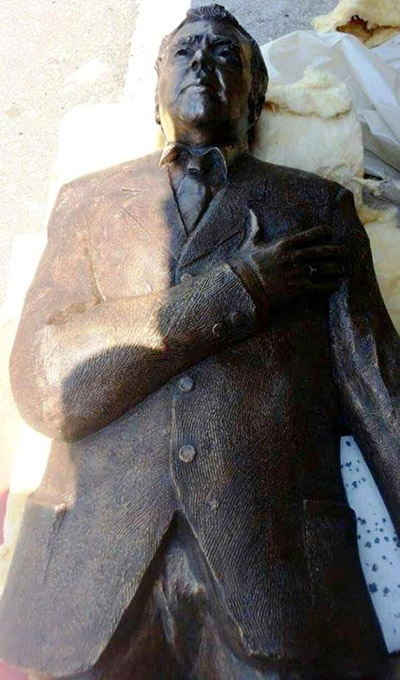 The bronze monument of Georgi Kaloyanchev is already here - in his home city of Burgas.

On Friday /10 July/ the base will be placed, and several days after that on it will be installed the 1.8 meter high sculpture, which immortalizes the emblematic for Bulgaria actor.

"The making of the bronze figure continued around three months, and the following finishing touches were done in a month and a half", said the author of the project - Georgi Chapkanov.

The monument will be place in the Summer theater, near the monument of the other great actor from Burgas - Apostol Karamitev. Their tandem of student roommates in the movie "Specialist in everything" will remain unforgotten.

The author of the project has portrayed Georgi Kaloyanchev in a costume with a theatrical mask in one hand, which he has removed from his face, and in a bow to his favorite public after a show.

A miniature model was exhibited in the Burgas art gallery and received the approval from people of the arts, and residents of the city.

A year ago Municipality Burgas, together with Public contributor's fund Burgas, started a campaign for collecting of funds for the building of a monument of the great Bulgarian actor Georgi Kaloyanchev. A year after the start of the initiative the monument is a fact, thanks to the funds gathered by the residents of Burga during a series of cultural and sports events, under the motto "I donote for Kalata!".